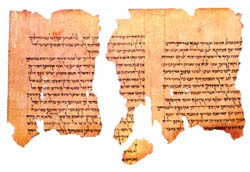 Many scholars believe the Dead Sea Scrolls were either written or collected by a sect of Jews called Essenes, who are described by the Jewish historian Flavius Josephus and the Alexandrian Jewish philosopher Philo. However, the scrolls themselves make no explicit reference to the Essenes. Scholars infer the connection because of the congruence of Essene philosophy and doctrine as reflected in the scrolls and as described in Josephus and Philo.

The Essenes lived from about the second century B.C.E. to the destruction of the Jerusalem Temple in 70 C.E. In this, they were no different from many other Jewish movements that disappeared with the Roman suppression of the Great Jewish Revolt. After 70 C.E., only what would become Rabbinic Judaism and a movement of Jews that would become Christianity survived.

Many scholars who believe the scrolls were written by the Essenes suggest that Qumran was an Essene settlement. But it is by no means universally agreed that Qumran was Essene. All scholars agree, however, that the group of scrolls is “sectarian”; that is, they represent the views of non- mainstream (Temple) Jews. Whoever wrote these sectarian scrolls was bitterly opposed to the Jewish priests who controlled the Temple in Jerusalem.

BAS editors have arranged a special collection of articles from Biblical Archaeology Review exploring the authors of the Dead Sea Scrolls and what this tells us about the Qumran community, Rabbinic Judaism, Jesus’ philosophy and the modern scholarly community. These articles present diverse textual and archaeological evidence supporting and rejecting the “Essene Hypothesis.”

A View from the Caves

Did the Essenes Write the Dead Sea Scrolls?

Another View: Do Josephus’s Writings Support the “Essene Hypothesis”?

Was It an Essene Settlement?

What Jesus Learned from the Essenes

Most scholars believe the Essenes wrote the famous Dead Sea Scrolls, and they point to the writings of Josephus, a first-century historian, to base their claim. In “Did the Essenes Write the Dead Sea Scrolls?” Steve Mason, a leading authority on the works of Josephus, says that the “Essene Hypothesis” is wrong and that the true authors of the Dead Sea Scrolls remain a mystery. Kenneth Atkinson, Hanan Eshel and Jodi Magness reject Mason’s argument in “Another View: Do Josephus’s Writings Support the ‘Essene Hypothesis’?” as they explain why, with the exception of the scrolls themselves, Josephus remains our best evidence in support of the “Essene Hypothesis.” In their letter, Atkinson, Eshel and Magness conclude, quoting Todd Beall, that “‘the sheer number of parallels [between Josephus’s description of the Essenes and the scrolls] is striking, and puts the burden of proof upon those who would insist that the Qumran community was not Essene.’”

The Qumran-Essene theory overwhelmingly dominates the field. But how sound is it? And how did it become so popular? In “Spotlight on Scroll Scholars: Dissecting the Qumran-Essene Hypothesis,” philosopher Edna Ullmann-Margalit turns the magnifying glass on the Scroll scholars themselves and assesses the validity of the theory.

In “Was it An Essene Settlement?” Alan D. Crowne and Lena Cansdale discuss evidence from Pliny to suggest that Ein Gedi, rather than Qumran, would have been an Essene settlement, and that the scrolls were placed at Qumran but not written there. This begs the question: If Qumran was not an Essene community, what took place there? In “Qumran—The Pottery Factory,” Hershel Shanks describes the arguments of Qumran archaeologist Yizhak Magen, who suggests that Qumran was a Roman-period pottery factory and had nothing to do with the scrolls left there.

Despite these objections, most scroll scholars suggest that Qumran was, in fact, an Essene community. For nearly 2,000 years, the Qumran caves protected the secrets of the Dead Sea Scrolls. Might the same caves also shed light on the mystery of who deposited the scrolls there in the first place? As Sidnie White Crawford explains in “A View from the Caves,” the evidence from the caves points not to refugees who had fled the Roman destruction of Jerusalem, but rather to the sectarian Essene community that lived in and around the site of Khirbet Qumran.

Scholars have been cautious about drawing a direct line between Jesus and the sectarian group thought to have written the Dead Sea Scrolls. In “What Jesus Learned from the Essenes,” Magen Broshi discusses Jesus’ teachings on the morality of poverty over wealth and his criticism of divorce. Jesus’ perspectives match those expressed in Essene philosophy and the Dead Sea Scrolls but run counter to mainstream contemporaneous Jewish beliefs. These doctrines, which have shaped the lives of millions of Christians over the past two millennia, and can be directly linked to the Essenes philosophy, as revealed to us in the Dead Sea Scrolls.