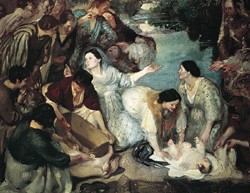 Although the Bible is largely a product of the male-dominated societies of ancient Israel and the first-century C.E. Roman world, some of its most fascinating, evocative and inspiring characters are women. BAS editors have compiled a special collection of articles from Bible Review on various women in the Bible, from Esther and Judith to Mary Magdalene, who helped shape Biblical history and the message of the scriptures.

How Mary Magdalene Became a Whore

Forgotten Heroines of the Exodus

Fertile mother, wilderness demon, sly seductress—the resilient character Lilith has been recast in many roles. Who is Lilith? As Janet Howe Gaines writes in Bible Review, “In most manifestations of her myth, Lilith represents chaos, seduction and ungodliness. Yet, in her every guise, Lilith has cast a spell on humankind.” Follow Lilith’s journey from Babylonian mythology, through the Bible, to medieval lore and modern literature in “Lilith: Seductress, Heroine or Murderer?”

If you think you know who Mary Magdalene was, chances are you’re wrong. She was not the “woman in the city who was a sinner” (Luke 7:37). Nor was she the woman caught in the act of adultery (John 7:53–8:11), nor the Samaritan woman said to have five husbands and to be living with a man not her husband (John 4:8–29). She was actually a leading participant in some of the principal events of Christian faith and possibly a source of apostolic authority for women. In “How Mary Magdalene Became a Whore,” Jane Schaberg redresses a longstanding slander and restores the Magdalene to her rightful place of dignity in Biblical history.

The name Jezebel conjures images of villainy and lewdness. But despite her bad reputation, her marriage to King Ahab was actually a model partnership. It’s not as perverse as it might initially sound, says Mary Joan Winn Leith in “First Lady Jezebel.”

Twice in the Book of Exodus, Moses’ life is spared by the quick thinking of women. And yet, from Moses’ time on, the bravery of these and other women of the Exodus has largely been forgotten. Recovering the implied story behind the Biblical text, Tikva Frymer-Kensky retrieves these heroic women from the shadows in “Forgotten Heroines of the Exodus.”

One of the few differences between the beautiful and brave heroines Judith and Esther is that Judith is openly pious and Esther is not. So why was the Book of Esther included in the Hebrew Bible while Judith was left out? Sidnie White Crawford explores this question in “Esther Not Judith.”

Though their story is confined to portions of a mere seven chapters in Genesis, there are few Biblical characters more vivid than Leah and Rachel. What reader of the Bible can forget the substitution of Leah for Rachel on Jacob’s wedding night? Who is not familiar with the 12 sons borne by these two matriarchs and their concubines—the 12 sons who were to spawn the 12 tribes of Israel? Samuel Dresner examines each woman’s actions—especially their naming of their children—and mines the rich vein of rabbinic commentary and Christian art devoted to these two pivotal figures in “Rachel and Leah.”

A late-second-century apocryphal text tells of a woman who defied society to follow the apostle Paul. In the succeeding centuries, her fame extended from Asia Minor to the eastern borders of the church, to the sands of Egypt and into Europe. As described in “Thecla: The Apostle Who Defied Women’s Destiny” by David R. Cartlidge, Thecla’s story provides valuable insights into the role of women in early Christianity, as well as the challenges a female apostle faced in the Greco-Roman world.