Strata: The Bible in the News: So It Sayeth

By Avi Hurvitz
Did the language of the Bible—Biblical Hebrew—evolve over time? Professor Avi Hurvitz argues there are three distinct forms of Biblical Hebrew, each one corresponding to certain parts of the Bible and other ancient texts.
Biblical Archaeology Review, September/October 2016

By Mary Joan Winn Leith
How was the first woman created in Genesis 2? Was she made from the man’s rib or, as recently suggested in BAR, from his os baculum (penis bone)?
Biblical Archaeology Review, March/April 2016

Liberator of the Nag Hammadi Codices

By Charles W. Hedrick
A cache of ancient Christian Gnostic texts was found near Nag Hammadi, Egypt, in 1945—two years before the discovery of the Dead Sea Scrolls. Similar to the situation with the Dead Sea Scrolls, a monopoly of scholars held up the publication of the Nag Hammadi texts and would not permit anyone else to see them. The late Jim Robinson intervened, and by 1970 he had managed to free the Nag Hammadi Codices.
Biblical Archaeology Review, July/August 2016

From Eden to Ednah—Lilith in the Garden

By Dan Ben-Amos
Who were the original humans that God created in the Garden of Eden: Adam and Eve? Or Adam and Lilith? A close look at the opening chapters of Genesis—and ancient Jewish mythology—may suggest that Lilith came before Eve!
Biblical Archaeology Review, May/June 2016

Does archaeological evidence connect with Israel’s Exodus from Egypt—a central event in the Bible? Egyptian artifacts and sites show that the Biblical text does indeed recount accurate memories from the period to which the Exodus is generally assigned.
Biblical Archaeology Review, May/June 2016

By Tony Burke
The apocryphal gospels didn’t make the cut. But were they truly rejected, suppressed and destroyed? Until recent times there was no doubt. But now this “truth” may be unraveling. Many early Christians may have regarded these apocryphal texts as sacred.
Biblical Archaeology Review, September/October 2016

Arabia or Africa: Where Is the Land of Sheba?

By Bar Kribus
The meeting of King Solomon and the Queen of Sheba is described in the Bible. Bringing exquisite gifts, the Queen of Sheba came from an exotic land—but where exactly? Ethiopians claim the Queen of Sheba as part of their heritage, but archaeological and historical sources document a Kingdom of Saba (Sheba) during Biblical times in modern-day Yemen. Who has the rightful claim to the Queen of Sheba?
Biblical Archaeology Review, September/October 2016

By James R. Edwards
How accurate is Luke’s account of the Ephesus riot described in Acts 19:23–41? Excavations at the site bring this Biblical event to reality in a new way—from inscriptions and figurines of the goddess Artemis to the theater where the riot took place.
Biblical Archaeology Review, July/August 2016 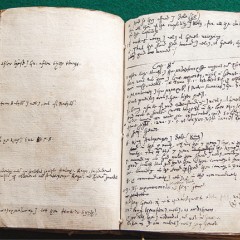 The Bible in the News: Post-Babel Babble

ReViews: The Significance of Ancient Cities to the Bible’s Formation